The final part of the Belfast Hill’s geology story is from the Pleistocene epoch (the first part of the quaternary period) that began 2.6 million years ago.

The major change in climate during the Pleistocene period is commonly referred to as the Ice Age.   In fact, ice was only present for relatively short periods of time but its impact on the landscape cannot be underestimated. Although no rocks were formed during this time, the ice shaped and sculpted the landscape that we see today and has been the single greatest erosive force on the planet.  Ice-masses, often thousands of metres thick, moved over the entire landscape eroding and re-depositing vast amounts of material.

The area wasn’t completely barren though and the remains of some Pleistocene giant mammals have been found in a number of locations. These have included teeth of the woolly mammoth that would have thrived in the tree-free environment of the Ice Age. Antlers of the massive Irish deer (also known as the Irish elk) have also been found, and with a span of just under 4 metres these are the largest of any known deer, extinct or not. 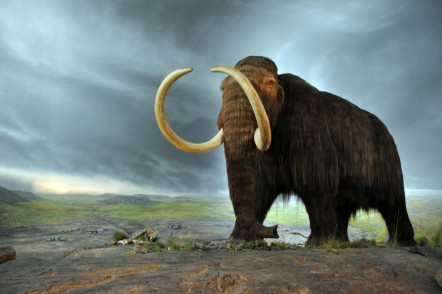 Artist’s impression of a woolly mammoth