Carnmoney Hill sits at 207 metres above sea level and is steeped in history and folklore.

Its name comes from the Irish Carn Monaidh, meaning ‘cairn of the hill’. There was likely to have been a cairn or stone pile on the hilltop which could place human influence on Carnmoney Hill as far back as the Bronze Age, two thousand years ago. At least two souterrains, man-made underground tunnels,have also been found on the hill; these were probably used as hiding places from the Vikings and other raiders. The name Dunanney has been translated as Dun Áine meaning ‘Áine’s fort’. Áine was a Celtic sun goddess, associated with fertility of the land.

An Early Christian rath, or fortified settlement, provides evidence of human habitation on the hill some 1,200 years ago. In ancient times, fairs and festivals were held at Dunanney, with wonderful views over Belfast Lough. The fort may date to Celtic times (around 500 BC). There are several other raths that exist in and around Carnmoney Hill.

Carnmoney Hill contains remnants of ancient woodland – a rare and precious habitat. Ancient hedgerows, mostly hawthorn and hazel, form quiet passageways and in the 1800s would have led to isolated farmsteads on the hill. The hedgerows are lined with abundant wildflowers including wood anemone, wood sorrel, bluebells and primroses.

Carnmoney is rich in limestone, which was once quarried and processed in kilns. The end product, lime, was much sought after. It was used to improve the nearby upland meadows for cattle grazing and in mortar for building. There are the remains of at least two lime kilns at Carnmoney Hill. 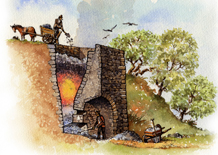 Arguably, one of the most amazing facts about Carnmoney Hill is that this modest mound can lay claim to being the place where, in 1910, Lilian Bland, flew a bi-plane for one quarter of a mile, making her the first woman in the world to build and fly her own plane. Lilian, who lived locally, designed and built her plane and christened it the Mayfly – as in ‘may fly, may not fly’.