Colin Glen Forest Park is a beautiful, wooded river glen on the edge of the city.

The Glen comprises 200 acres of scenic woodland, river, open grassland, waterfalls and wildflower areas. Colin Glen was a game reserve used by the local landowners for sport and recreation in the 1800s. 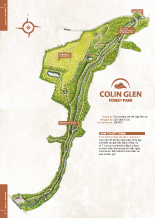 By the 19th century, Belfast had become the world centre of linen production. It had the advantage of many rivers and streams that flowed from the Belfast Hills. Irish linen was Belfast’s major export and it was famous throughout the world. Belfast was even known as Linenopolis.

Colin Glen was important in the linen industry from the 1700s. The McCance family established both flax and beetling mills along the Colin River. The river was diverted along a ‘mill race’ and the water turned a wheel that powered the mill. The remains of the mill race can still be seen at the weir bridge.

During the ‘Penal Times’ of the 17th and 18th century, Catholic worship was banned. Priests were often captured and killed by ‘priest hunters’ working for the Crown. Belle Steele was a Presbyterian lady from Poleglass who sympathised with the Catholics. She was the trusted custodian of the sacred vessels used at secret ceremonies at a ‘mass rock’ nearby.

The lower glen was virtually clear felled for the war effort during WWII. However, between the wars, McGladdery’s Brick Manufacturers used the Keupar Marl from the riverbed to make bricks. The pits from the brickworks were later to be used as an inert landfill site. Illegal dumping threatened to ruin this glen, but since 1989 it has been reclaimed back to its former glory by capping the landfill site and the planting of thousands of native trees. The Glen was a perfect location for a bleach green. The old bleaching process used the sun to turn the brown linen white. 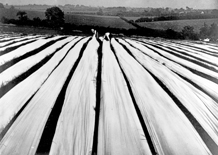 The Colin River flows past a fantastic fossil bed. Every winter spate floods bring down a range of ammonites, bivalves, brachiopods and crinoids as well as more unusual fossils such as sharks teeth, ichtyosaur and plesiosaur vertebrae. 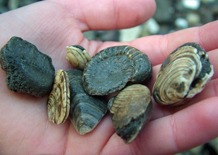