Divis and the Black Mountain rest in the heart of the Belfast Hills and provide a backdrop to the city’s skyline.

Divis or Dubhais, meaning ‘black ridge’, refers to the dark basalt bedrock. Divis stands at 478 metres and the Black Mountain at 390 metres, making Divis the highest point in the Belfast Hills. 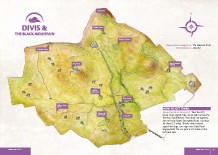 INFLUENCE OF MAN ON THE LANDSCAPE

In many ways, the open landscape of Divis and the Black Mountain reflects the history of the Belfast Hills in microcosm. The landscape here is diverse and contains many exceptional sites, from prehistoric burial cairns and hut sites to stone walled enclosures of possible Early Christian date. Human impact on the landscape is also seen through the survival of the small farms and their associated field systems dating from post-Medieval times.

There is a wide range of archaeological sites within a few hundred yards of the Divis Warden’s office. The largest of these is the remains of a stone walled enclosure on the slopes opposite the office. It has an obvious entrance to the east and apparent cells or compartments built into its wall on the south western side. This site requires further study and may have more secrets to reveal.

Another stone walled enclosure lies north east of the Warden’s office. It is a type of cellular enclosure and appears to be unique in Ireland. Though the site is undated it is possibly of prehistoric origin. The closest example of a similar monument is in western Scotland and this dates to the early Iron Age.

Not far from this cellular enclosure lie the remains of a small cluster of round houses or huts. These lie just north of the main road to the transmitter and while they have not been investigated they also appear to be of prehistoric date. 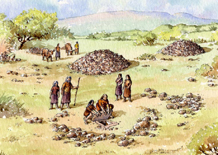