Slievenacloy Nature Reserve is located in the Belfast Hills. Initial impressions may suggest only grassy fields, but the site is in fact a vast wildlife paradise of grassland, meadows, rush and heath.

Slievenacloy or Sliabhna Cloiche means ‘townland of the stone’. This upland terrain was a typical setting for prehistoric burial activity, with cairns in particular often set in prominent positions on ridges and hill tops. It is believed that this was an important sacred landscape during the Neolithic and Bronze Ages. In total, eight prehistoric burial monuments and associated features have been recorded as having once stood on Collin Mountain. Today only a few remains can been seen.

FARMHOUSES ON THE HILL

This building is one of five farmsteads located within the nature reserve. It is a typical example of a local 18th or 19th century dwelling and is actually two joined cottages. Such clusters of buildings are known as claghans. This building appears on the first Ordnance Survey Map of Northern Ireland in 1833 and again on a later map created in 1857. It was owned by the Marquess of Hertford and let to Andrew Kernaghan and son. In fact, there was always someone living in the farm building until the last occupant left in the 1950s. Look out for the old fireplaces and even some of the original floor tiles that remain.

On the southern side of the Slievenacloy site, towards the Stoneyford River, you will find a mysterious earth ring. No one is quite sure what it is, or even from when it dates. It is not circular enough to be an Early Christian rath. There have been various other suggestions ranging from a prehistoric earthwork to a 17th century artillery fort. What is clear is that, until we have hard evidence, its secrets will remain a mystery.

Just below the earthwork, on private ground, was the site of a false WWII runway, planned to be used to distract German bombers from targeting Aldergrove, Nutt’s Corner and Langford Lodge runways, which were located a few miles west. There remains a large bunker from which RAF staff would switch on rows of prominent lights during nights of high alert. 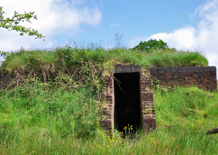