The Bronze Age saw an increase in population and prosperity which led to a more warlike society keen to protect this newfound wealth. People were learning about metal techniques and from c.2500BC they started to make tools and weapons with bronze.

Several artefacts from the Bronze Age have been found in the Belfast Hills. This food vessel was reputedly found on Armstrong’s Hill at a cairn known as Carn Shéain Buidhe (Yellow Jack’s Cairn) in 1840. 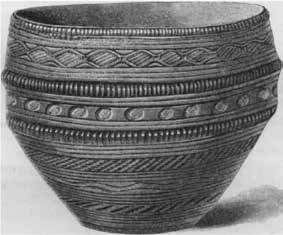 In August 1993, a Bronze Age gold dress fastener (pictured top) was found by the path to the summit of McArt’s Fort. The Ulster Museum followed this find with an excavation and concluded that it belonged to the period between 1000 and 700BC. It is still on display at the Ulster Museum today.

Evidence of Bronze Age settlement in the hills can be seen on Divis Mountain in the form of circular hut sites and burial cairns. Virtually every hill at this time had cairns where important leaders or tribal chiefs were laid to rest. Furthermore, in the townland of Ballyutoag, not far from Cave Hill, a circular hut site was excavated in 1982. Radio carbon dating suggests that people were living there in the Late Bronze Age, perhaps between 1050BC and 750BC.