Unfortunately there are known to be high levels of invasive species in the Belfast Hills. This may in part be due to flytipping and also the number of landfill sites dotted across the hills, both legal and illegal. Such sites often have associated invasive species due to cutting/vegetation present in the dumped material. River corridors can provide the perfect habitat for invasive species to spread. Within the Belfast Hills, Japanese Knotweed and Himalayan Balsam are prevalent. Invasive species such as these are the second greatest threat to biodiversity worldwide after habitat destruction. They can negatively impact on native species and threaten whole ecosystems causing serious problems to the environment and the economy.

Himalayan Balsam is removed by pulling the plant up by its roots in May and June before it forms seed heads. The plants are then placed in bags and left to decompose, so preventing them from spreading further. This removal needs to be repeated for at least a couple of years until the seed bank has been exhausted.  Himalayan Balsam plants which are easily accessible are best tackled simply by pulling up the plant, however places which may pose health and safety issues can be chemically treated by a contractor.

Japanese Knotweed has a very extensive root system so cannot be pulled by hand. Instead, control must be via systematic spraying by qualified contractors. The size of the root system also means that spraying needs to happen for at least three years to totally destroy the plant. Subsequent monitoring is advisable.

Control of invasive species has been happening along the Colin River, within Ligoniel park and Glencairn park in partnership with Colin Glen Trust and Belfast City Council, and with the help of lots of volunteers. 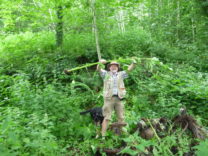 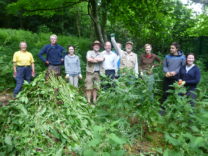