Rocks from the Cretaceous period make up the next layer of the Belfast Hills ‘cake’. This period lasted from 145 to 66 million years ago when the landmass that we now know as Ireland was beginning to take shape and was located somewhere in the region of Southern France.

Global sea-level was higher during the Cretaceous period than at any other time in Earth’s history. At its height, sea-level was 250m higher than the present day. Landmasses only accounted for approximately 18% of the Earth’s surface and as a result the majority of the shallow seas were well away from any landmass and were therefore very clear. 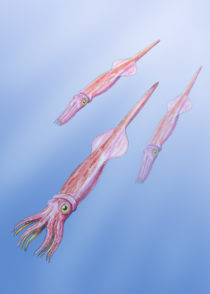 The majority of the rocks from this period are found as white limestone, more commonly known as chalk. This brilliant white rock formed on the floor of the Cretaceous sea primarily from the remains of a type of algae called coccolithophore. These algae prospered in the clear, calcium rich waters of the time, and when they died, their microscopically small calcite skeletons fell to the sea floor and accumulated over millions of years.

It wasn’t just coccolithophores that inhabited the Cretaceous seas. One of the most common fossils found is the belemnite, a squid-like creature with a hard internal bullet-shaped shell. Sea urchins, coiled-shell ammonites and crustaceans would also have lived in these shallow seas and their remains can be found in many places.

The Cretaceous period came to a dramatic end 66 million years ago and resulted in another mass extinction when 75% of all life on Earth was obliterated, including most famously, the dinosaurs!