The Age of the Sea Monsters

The next layer of the Belfast Hills ‘cake’ formed during the Jurassic period that took place from 200 to 145 million years ago. The beginning of the period is marked by a rise in sea-level that led to the majority of the landscape being covered by a shallow sea. The climate was warm and humid, and any land that was exposed would have been well vegetated.

The rocks that resulted from this rise in sea level are mostly grey mudstones, known as Lias Clay, and limestones. These rocks are amongst some of the most fossiliferous in Northern Ireland and includefossils of coiled-shell ammonites, sea urchins, sea-shells, and even some remains of huge marine reptiles including Ichthyosaurs and Plesiosaurs.

The Jurassic rocks make up the second layer, or the ‘jam’ of the ‘cake’. This is rather appropriate as the mudstones from this period are notoriously soft. Due to their high clay content they can absorb lots of water so after heavy rain it is said that they have the consistency of toothpaste. It is these rocks that underlie the cliffs of the Antrim Coast Road and this is the reason that there are lots of landslides after heavy rain, as the rocks above simply ‘slip off’.

Although the Jurassic period is commonly associated with dinosaurs, there has never been any dinosaur fossils found in Northern Ireland. This is partly because the majority of the area was covered by a sea during that time so dinosaurs simply couldn’t live here, but it is also because a great deal of the Jurassic rocks have been removed by weathering and erosion. However, that’s not to say that dinosaur fossils won’t be found here!

The best place to see Jurassic rocks is in Colin Glen Forest Park. 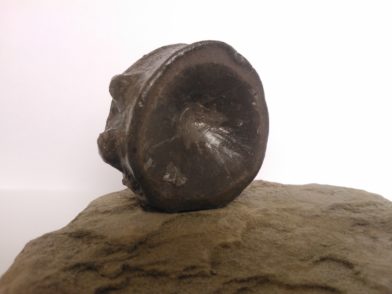 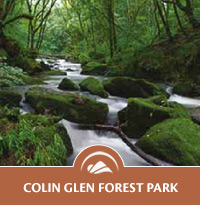 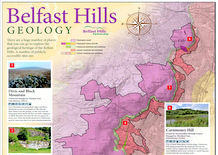