Archaeologists at this year’s Belfast Hills Big Dig at Slievenacloy’s earthen ring were stunned and excited to find evidence of craft manufacture at what appeared to be a simple Early Christian farmstead and cattle enclosure.

The community archaeology dig run by the Belfast Hills Partnership in conjunction with Ulster Wildlife uncovered a waste glass globule and unfinished broken lignite bracelet, providing evidence of the manufacture of glass and lignite jewellery on the site.

Sarah Gormley from QUB’s Centre for Archaeological Fieldwork remarking on the finds said “Lignite jewellery and glass beads are commonly found on dig sites, however what makes these finds so exciting is the fact that they are unfinished, rejects from the manufacturing process, indicating they were made on site, perhaps by travelling crafts people. We have found evidence of craft manufacturing in Northern Ireland before, but generally in sites of high status. This changes how we interpret the site, giving it a whole new level of significance”.

Lizzy Pinkerton from the Belfast Hills Partnership said, “It’s really exciting to speculate about who lived at this site and why we are finding evidence of craft manufacture. We always believed that this site was special – the earthen ring itself is about 10 times bigger than your typical early Christian rath or ringfort, so someone went to a lot of effort to create it.”

Deborah McLaughlin, Ulster Wildlife’s Nature Reserves Officer for Slievenacloy said: “As well as being a haven for wildlife and one of the best sites for biodiversity in the country, Slievenacloy is also rich in archaeological features which illustrate a long relationship of people with this landscape. The origins of the earthen ring have always been a mystery, so we are enjoying learning more about the true story of this fascinating site.”

The Big Dig is part of an exciting new scheme called ‘Our Bright Future’ funded by the Big Lottery that supports young people to lead progressive change in their communities and local environment. Over the month of the dig hundreds of young people will have the opportunity to become archaeologists for the day and literally get their hands on history.

A public open day is being held on Saturday 18th June, along with an excavation training course on the 24th and site talk on the 28th so you can come along and find out about this exciting site for yourself. All events are free but booking is required. Visit our events section for more details. 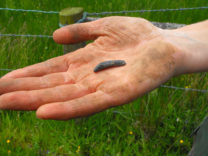