The Belfast Hills have a rich history, the evidence of which may be seen by the remains left in the landscape. Much of this history is as yet undiscovered. When the National Trust bought the Divis and Black Mountain site in 2004 only one historic monument/feature was identified. To date 223 have now been uncovered. This provides a taster for what else must be out there in similar surrounding hill sites.

The Belfast Hills are dotted with signs of how we used to live down through the centuries. 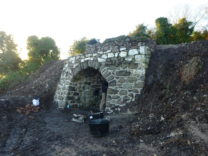 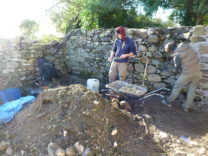 Site survey work has been undertaken over the past couple of years by a group of enthusiastic individuals with an interest in local history.  Reports that have been created as a result of this work are provided below.

Archaeological digs in the Belfast Hills

Over the years a number of archaeology digs have occurred in the Belfast Hills. These have included Cave Hill Country Park’s Cashel, an area near Divis & the Black Mountains visitor centre, and Carnmoney Hill’s limekiln and farmhouse. These digs have been opened to school groups, community groups and members of the public, attracting hundreds of people to each dig.
A number of reports have been produced on the findings of these archaeological digs and are provided below.

Belfast Hills Partnership Staff have gathered historic mapping information to build up a distribution map of features such as limekilns, mills, lazy beds and old river courses. This information has been lovingly extracted from NIEAs historic map viewer, 1st Edition OS maps, Griffiths valuation, old estate maps and personal knowledge. We have done our best to make sure the information is as accurate as possible while trying to interpret this wealth of information. Please note that this is historic information and many sites/features no longer exist.

The files provided are KMZ files that work on Google Earth.

Opening KMZ files on Google Earth
Most computers don’t recognise KMZ files so if you double click on them they don’t know which software to open it up with.
The simplest way to get these open is to firstly save them onto your computer – entirely up to you where.
Then launch Google Earth. When it’s up and running, go to File, Open and direct it to the saved files. Once you’ve checked it out, you should go to Save My Places and it will save it permanently in your My Places folder on the left.