Since the arrival of farming to Ireland in 4000BC, the hills have been farmed recurrently as climate and technology have changed.

Gradually the Gaelic method of open summer grazing, or booleying, of the hills was replaced by permanent enclosed farmland. This can be seen in the 1767- 1770 Lord Donegall maps, referred to as ‘parcels of land’.  This coincided with great civil unrest in areas such as Carnmoney as rent rose steeply.

Along with farming came the enclosure of land. Until then farmsteads usually had small gardens with lazy beds for growing vegetables, while the rest of the land was open for grazing. To maximize rent, landlords pushed for the enclosure of farmland, giving us the patchwork of fields that typifies Ulster today.

As Belfast grew exponentially, the demand for fresh food, in particular milk, meant that the 1800s was a boom time for farming. Every corner of the hills was being farmed, with a line of lazy beds and dairies along the foothills. However, a combination of poor harvests, refrigeration, transport and the development of farm machinery, plus the increased industrial employment opportunities in Belfast, led to a steep decline in the number of people farming in the hills. This resulted in a high amount of abandoned houses right across the hills. Today’s active farmers in the hills are a small remnant of what was once a vibrant community. 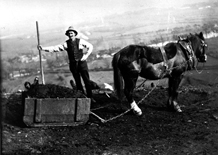 Mr Magee, Whiterock, with a slipe