The ability to harness the power of the rivers flowing down from the Belfast Hills signalled the start of the industrial development of Belfast. Mills were built along the Colin, Ballymurphy, Forth and Milewater rivers. These mills changed in use between production of corn, flax or cotton, depending on the export market at the time. 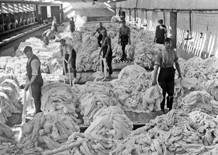 Working in the linen mills

A wide network of dams and mill races were created to maintain flow and power. Many of these are still present in the landscape today, e.g. the Half Moon Lake and Ligoniel Dams. 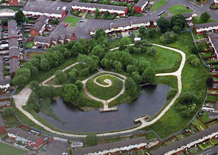 The development of these mill villages, e.g. Ligoniel and Ballymurphy, was the start of the massive expansion, with people flooding in from rural areas to work in the mills. As technology improved, mills were built further downstream along the Shankill, Crumlin and Falls Roads. Most people from greater Belfast have a connection to mills in their ancestry.

As well as the physical remnants of old mills, dams and mill races in and around the hills, one of the strongest legacies has been the strength of the local community in what were once these mill villages.

This bird’s eye view shows the major mills and bleach greens which drove the growth of Belfast in the 18th and 19th centuries.

While not all these mills would have been active at the same time, the map shows how important the rivers flowing from the Belfast Hills were in literally powering this expansion. The steep fast flowing upper sections were particularly important for the earlier 18th century mills. As the technology became more efficient and the use of lots of dams and reservoirs grew, more mills could be built along the lower stretches. By the late 1800s, the entire stretch of slopes below the Belfast hills was a complex network of mill races, reservoirs, dams and sluice gates all to power our mills. 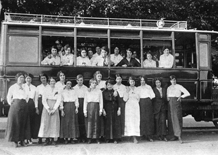 Industrial life in the hills

This development meant that a string of mill villages sprung up along the foothills such as Ligoniel, Ballysillan and Collin before eventually being swallowed up by the expanding city.

These were populated with thousands of migrants from the local countryside looking for work. This might explain the strong local community identity which these parts of Belfast have to this day.