Quarrying had existed in the hills for thousands of years, as shown by the Neolithic flint factory at Ballymagarry, quarries seen on old estate maps, and in townland names such as Legoniel, ‘hollow of the limestone’.

The growth of Belfast in the 1700s, with its stone buildings such as the Linen Hall Library, caused a rapid increase in the number of quarries and limekilns. At this time, lime production for mortar and improving farmland became very important economically.

What started off as a side-line for farming families soon became a major business. For instance, John McQuillan of Colinwell began quarrying limestone over 100 years ago. Limestone from the hillside was processed in coal fired kilns and the burnt lime was used as fertilizer, in the production of town gas or as building mortar. In the 1920s – 1930s quarrying at this site was extended to the adjacent basalt or ‘blackstone’. The crushed basalt was used in all types of building products, but particularly in the construction of new roads.

There are many abandoned quarries dotted throughout the hills; they have become havens for wildlife and places of recreation, such as the Limestone Quarry at Cave Hill or Belshaw’s Quarry at White Mountain. 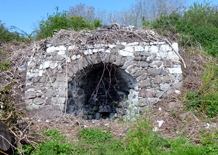