WW2 bunker in the Belfast Hills

There have always been wars, battles and military sites in the hills, such as McArt’s Fort and Castle Robin. WWII brought a sudden increase of new activity in the hills.

It is well known that Belfast was ill-prepared for the Blitz of spring 1941, with virtually no anti-aircraft defences. The first impact of the Blitz was on the thousands of city dwellers who literally ran for the hills and camped out in ditches and barns, with some settling more permanently in ‘tin towns’ at Upper Springfield and Upper Crumlin Road.

After this blitz came the rapid expansion of anti-aircraft gun installations or emplacements and the development of Q-sites, which were attempts to deceive bombers by mimicking RAF runways and burning suburbs. Evidence of these secret sites is quite thin on the ground, but we know that there were sites at Slievenacloy, Ballyutoag Hill, Upper Hightown and Carnmoney Hill. Furthermore, the hills were used for experimental radar stations and training sites such as the American Rangers at Slievenagravery prior to D-day. 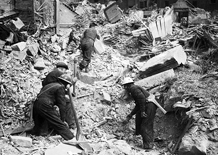 Destruction caused by the Belfast Blitz