The victorious equestrian logger named Imogen is owned by Total Tree Care Company, a tree surgery and NPTC and Lantra training and assessment centre, based in Suffolk in west Belfast.The company’s yard near to the peace wall between Suffolk and Lenadoon. 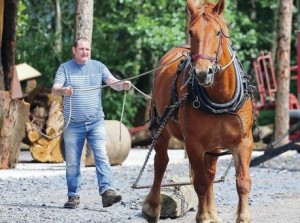 The team who travelled to Scotland with Imogen who is a rare breed, to compete in the British Horse Logging Championships, were the first from Northern Ireland to compete and successfully carried off the overall event against teams throughout Britain. Total Tree Care Company are in the process of starting an apprenticeship scheme to train people in horse logging through Lantra and promote the benefits of using horses on sensitive sites which would also be the first in NI. At the moment such training and apprenticeships are only available in mainland UK.