At the start of the Landscape Partnership Scheme, the Belfast Hills visitor numbers were gradually increasing but they remained a very under-used resource, with many people who lived in the shadow of the hills never having been to any of the public sites. Belfast City Council’s Strategic Tourism Strategy 2011 referred to the Belfast Hills as a key destination for visitors and one that should be enhanced and promoted. We made it our aim to encourage more people to enjoy the heritage landscape, particularly areas as yet unrecognised as valuable to the majority of visitors which we hoped would spread the increase in visitor numbers across a wider landscape. In order to accommodate increased visitor numbers, access needs careful management and monitoring to ensure that the heritage of the landscape is not inadvertently damaged. It is therefore essential that adequate paths and infrastructure are in place to cope with increasing visitor numbers, and to ensure that vulnerable sites are protected.

New paths were installed on Divis (summit path), Cave Hill (McArts fort path and limestone quarry path), Ligoniel Dams and Ligoniel Park. Path improvements have been made at Slievenacloy and Upper Colin Glen. The Dunanney Lane entrance to Carnmoney Hill was improved with new parking installed, drystone wall built, wildflower meadow sown and path improvements, including a viewpoint, were made leading up to the lime kiln and farmhouse. A new entrance way, path and wildflower meadow was installed at The Horse Shoe Bend entrance of Cave Hill Country Park.

When additional links can be formed, we will work with the landowner to create access. 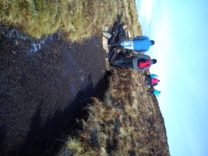