Schools of salmon streamed into local classrooms last month in refrigerated incubators! Year 9 pupils from Abbey Community College and Hazelwood Integrated College have been hatching fish eggs for release, into their local Ballymartin river with the help of the Belfast Hills Partnership.

The project known as ‘Salmon in the Classroom’ gives young people a unique opportunity to learn more about the life cycle of Atlantic Salmon as well as threats to the species, the impact of pollution and the importance of looking after our rivers.

The project is part of the ‘Our Bright Future’ initiative, funded by the Big Lotter Lottery NI, which aims to reconnect young people to their local environment, inspiring them to learn more about nature and becoming ambassadors for the planet.

The big release came on Thursday, when the young people said goodbye to their salmon into the Ballywater River, a tributary of the Sixmilewater that flows from the Belfast Hills and into Lough Neagh. This river has had a number of pollution incidences in the past which have resulted in the death of hundreds of fish; through this project local children aim to see fish numbers increase again.

Jo Boylan, Youth Outreach Officer for the Belfast Hills Partnership said “By taking part in this hands-on conservation activity, we hope these pupils will develop a sense of pride in their local river and legacy that will hopefully be passed from generation to generation”.

“It has been a brilliant experience for the children involved in the project with the pupils showing so much care and enthusiasm in nurturing their fish”. 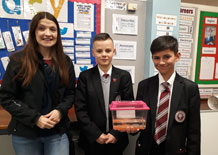 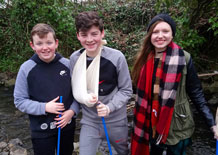